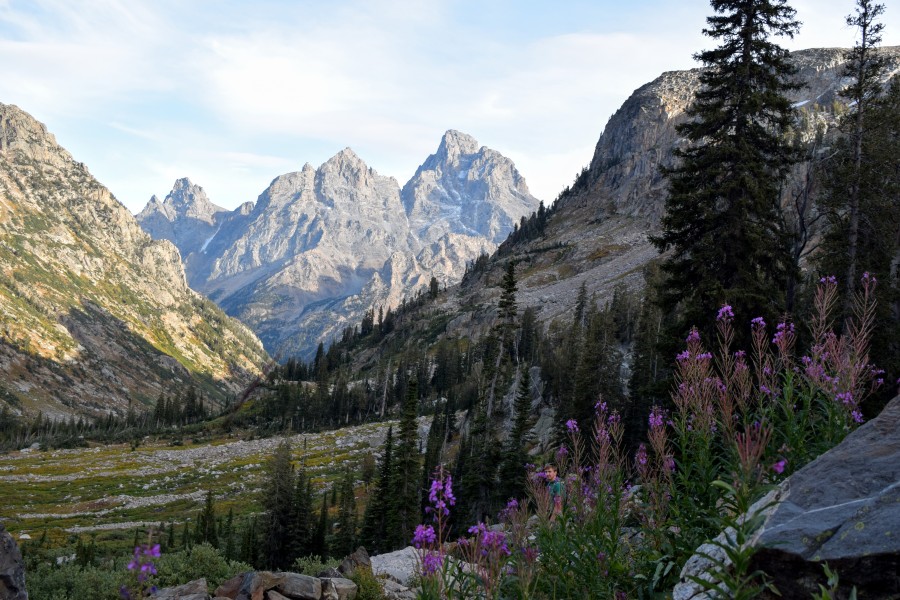 Oh, Grand Teton National Park! Of all the places we dreamed about visiting on our two-month road trip, I think I was MOST excited about the Tetons. A quick Google photos search will show you why I had permanent heart-eyes daydreaming about this place.

Of course, with our adventure pup Callie in tow, our options for national park sightseeing were mostly limited to scenic drives and the occasional paved trail—because those are (generally) the only spots where you’re allowed to take dogs. But we simply couldn’t visit the Tetons without a little backpacking action! After researching local kennels, we decided to board Callie for a few days so we could get out in the backcountry.

As for which trail to hike, the choice was obvious: the 19-mile Paintbrush-Cascade Canyon loop. This popular trail circles through the center of the park, cutting into the mountains through Paintbrush Canyon on one side and Cascade Canyon on the other. In between, the trail reaches its pinnacle at the Paintbrush Divide: a 10,700 ft. vista offering a sweeping 360-degree view of the Tetons’ signature rocky peaks.

If you’re graced with good weather, this trail promises the best that the Tetons have to offer: dense evergreen forests, alpine lakes, towering cliffs, wildflowers, stunning vistas, and even a good chance to spot wildlife. (Let’s just say you do NOT want to forget your bear spray on this one.)

So it’s no surprise that it’s also the most popular trail in the park for backpackers—and even ambitious day hikers. But we crossed our fingers that going in early September meant we would miss the worst of the crowds (without having to ice-ax our way across slippery mountain passes).

There are several ways to approach this hike. We decided to tackle it counter-clockwise and give ourselves plenty of time (two nights and nearly three days). Knowing we’d have a late start after dropping Callie off at the boarder’s, we also opted for a shorter hike on day one. We were (thankfully) able to reserve the backcountry passes we needed, so our route looked like this: 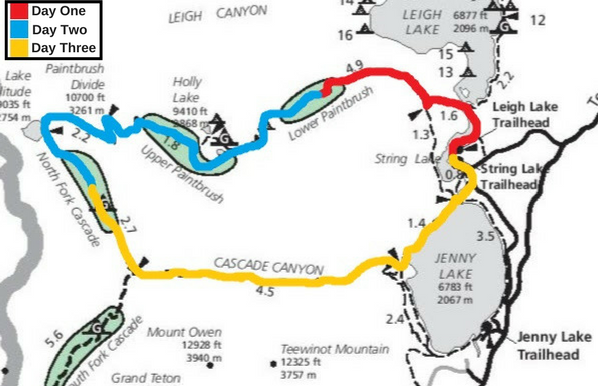 The night before our trek, we splurged on a hotel room in Jackson Hole—totally worth it, since we had been camping for the past week or so. We picked up our permits at the ranger station the day before, which meant all we had to do the next morning was drop Callie off at the boarder’s, grab a quick lunch, and head into the park!

[A quick disclaimer before I begin: all distances/elevation are all approximate, and I would say we are fairly average hikers in speed and ability.]

After finding a parking spot in the String Lake lot, we donned our packs and hit the trail—once we found the trailhead, that is. It’s a busy area with intersecting trails and lots of day hikers, and we were pulling out our maps no more than 10 minutes after leaving the car. But we found the right trail before long and set off at about 1:30 p.m. A late start, but that was expected (and why we reserved the closest camping area for night #1).

After looping around String Lake, the trail ducked into the trees and started gaining altitude at a steady, but reasonable, pace.

We were mentally prepared for a tough hike, knowing we had full packs and about a 1,000 ft. elevation gain to cover that day. But we were also full of first-day excitement and buoyed by the beautiful views, so we made good time. Just two hours later, we were surprised to find ourselves already at the edge of the Lower Paintbrush Canyon camping zone. 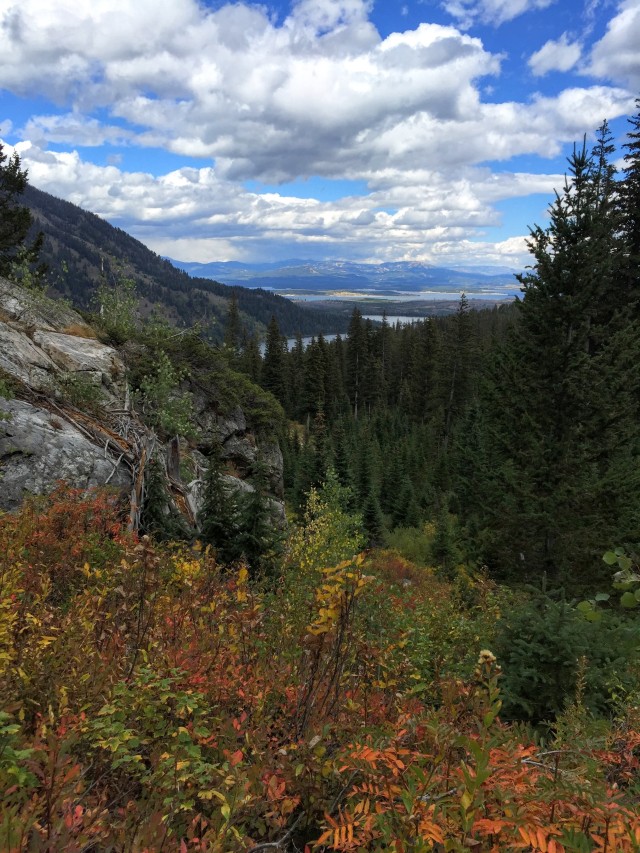 With plenty of time before sundown, we checked out all the available campsites before settling on our favorite: a large spot with a flat area for the tent and a perfect cooking rock nearby. We already had a couple of neighbors, but the sites were spread out enough to still give us plenty of solitude.

With camp all set up by 4:00 p.m., we settled in to relax. I loved it at first, reading in the sun in my Crazy Creek. But then the temperature—already chilly at 3:00 p.m.—quickly started dropping. When the sun disappeared behind a cliff at about 5:00, we had already piled on all of our layers. We held out until 6:00 p.m. before making dinner (dehydrated Pad Thai), which we inhaled as much for the heat as for the calories. Then, without a fire to warm us up, there was nothing else to do but get in bed. At 7:45. It wasn’t dark out, and we weren’t tired, but MAN it felt good to snuggle up in my down sleeping bag! Luckily, I had a list of conversation starters with me—so, warm and cozy in our sleeping bags, we talked about who we’d invite to imaginary dinner parties until the day caught up to us and we drifted off to sleep. 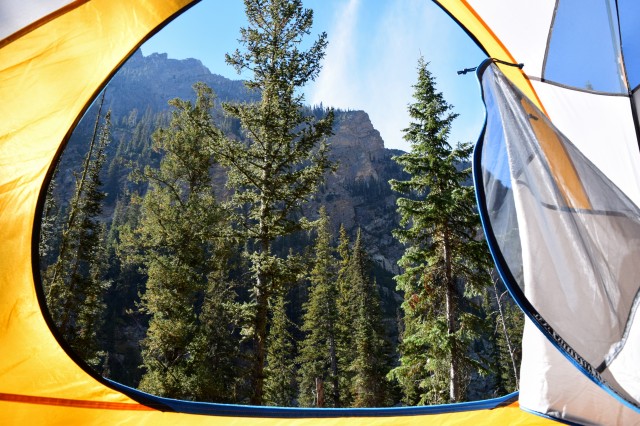 Day Two: SUMMIT DAY. At least, that’s the mindset I should have had. But with a good night’s sleep and an easy Day One hike under our belts, we started off on Day Two feeling confident…perhaps a little too confident.

The first long stretch of trail continued climbing up and out of the canyon. Despite the endless switchbacks, we were in great spirits. It might have also had something to do with the incredible beauty surrounding us.

Groups of other hikers passed by us pretty regularly, but we also hiked for stretches of time with no company other than some adorable pika, which darted out of the rocks to alert their friends to our presence with high-pitched squeals.

As we climbed, Jenny and Jackson lakes shrunk beneath us—and the views only got more and more magnificent. Roughly every 10 minutes, one of us would look up and exclaim, “Look at the view NOW!!!” For lunch, we found a rock outcropping just off the trail where we could munch on our summer-sausage-and-cheese tortillas while gazing out at this sight:

And then we kept going. Up and up and up some more. As our legs started getting tired, the air started getting thinner. Soon, we climbed out of the tree cover and into a much rockier, more barren landscape.

We arrived at the edge of the Upper Paintbrush camping zone in mid-afternoon, and I was glad we hadn’t chosen a route that included an overnight stay there. With no tree cover, no water (not that we found, anyway) and at a 10,000-foot elevation, we would have been in for a rough (and VERY cold) night. 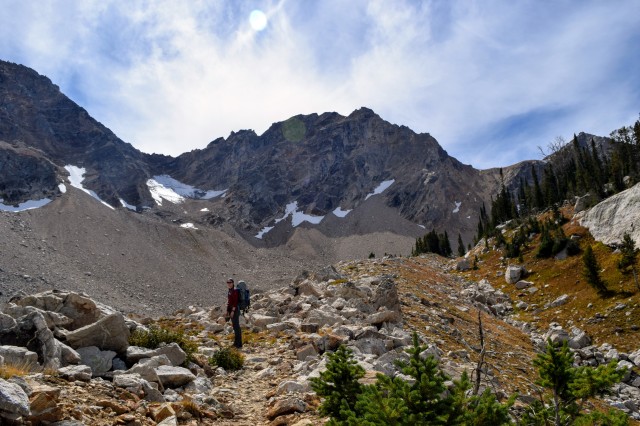 Unfortunately, our arrival at Upper Paintbrush also made one fact very clear: we had a long way left to go. Somewhere along the way I had miscalculated the distance, thinking that our Day Two hike would only be a little bit longer than Day One. But at this point, I busted out the map and realized that we still had nearly six miles more to hike—including a 700-foot climb to the Paintbrush Divide, then another 2,000 feet down to our campsite. Oops. No way could we afford to be exhausted yet.

As we headed up into the pass, the hike began to feel VERY different from anything I’ve ever hiked back east. Every once in a while, the towering, rocky cliffs emitted a low rumble—an acute reminder that death by rock slide is a thing, and also that we weren’t just going for a walk in the woods. We were climbing a mountain!

For the last quarter mile or so leading up to the divide, the trail became, basically, loose piles of rocks arranged into the rough shape of a path. My heart—already beating quickly from the thin air—started pounding if I looked over the edge into the valley below. So I focused on the climb. I was happy to have my single hiking pole for an extra bit of balance.

And then, FINALLY, we reached the top! We paused in the biting wind long enough to take in the expansive view and snap some victory photos. 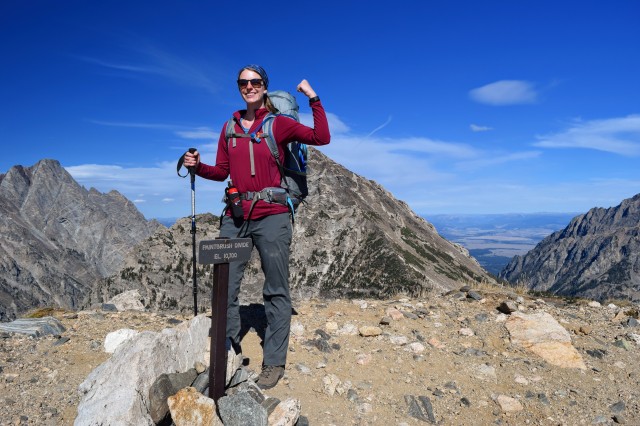 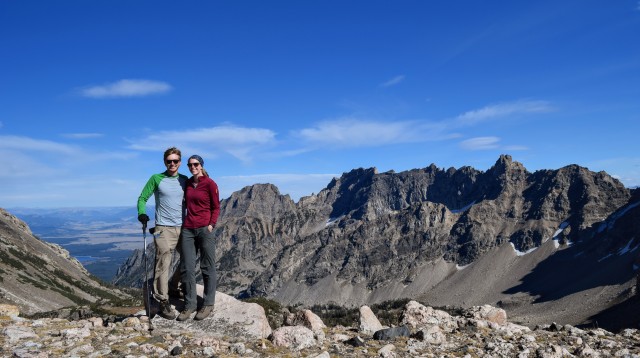 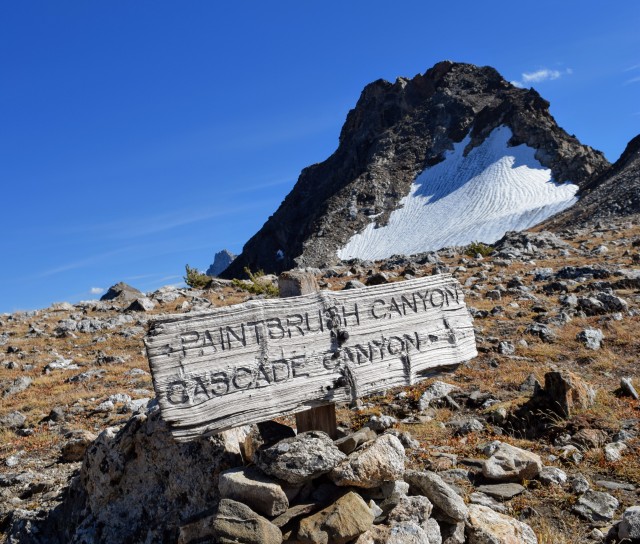 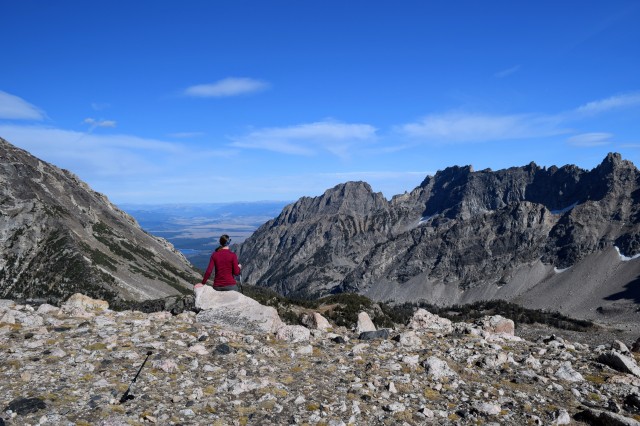 But we couldn’t linger for long—partly because of the freezing cold wind, but mainly because we still had several more miles and a 2,000-foot descent ahead of us. On the other side of the divide, we were immediately greeted by a whole new angle of Tetons beauty: glittering alpine lakes in one direction, and the majestic Cathedral Peaks in the other. 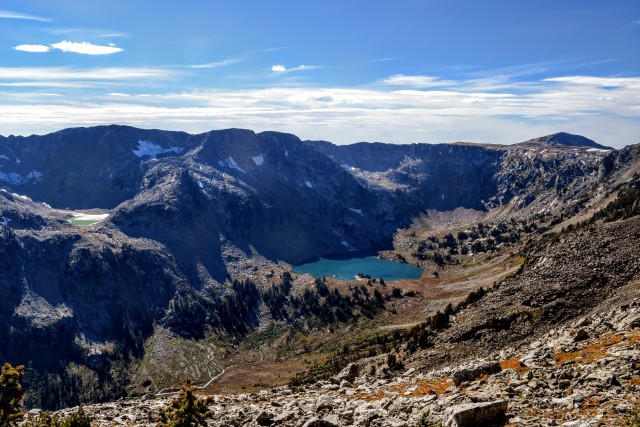 At this point, I was about ready to be done hiking. And as we started descending toward Lake Solitude down in the valley, I could suddenly see a gorgeous photo in my mind’s eye: sunlight sparking off of the lake and the Cathedral Peaks, illuminated by the late afternoon light, rising up in the background. But as we hiked, the sunlight started slowly disappearing behind the mountain in front of us (my perfect photo disappearing with it). We hiked faster and faster until I was practically jogging down the trail, which felt like it would never end. Like we were hiking toward a mirage. But thankfully, we did finally make it—just in time for me to get my photo before the perfect light faded away.

About 20 minutes later (hiking at a normal pace again), we reached the North Fork camping zone. Just in time to set up camp and cook dinner before passing out with exhaustion. This time, we were perfectly happy to go to bed early! 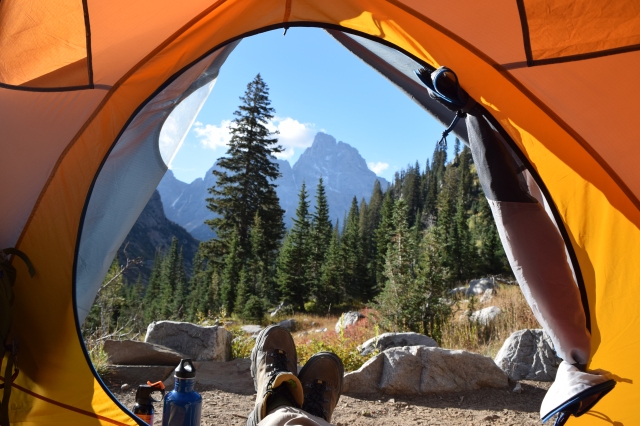 Our last day on the trail left us with easy terrain (just under a thousand feet to descend), but a decent amount of ground still to cover. It would have been easy if it weren’t for our aching muscles and sore hips. But, believe it or not, the hike was still gorgeous! 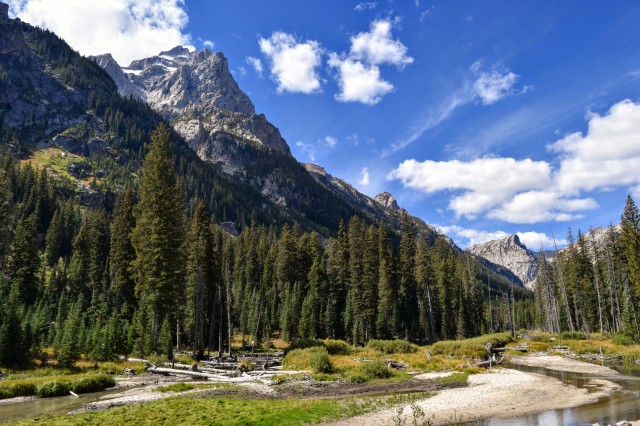 About halfway through, we came upon a small traffic jam on the trail, which turned out to be caused by a large male moose. He was just chilling near the stream—far enough from the trail not to be a concern, but close enough to make out the outline of his GIANT antlers. We opted not to try to get any closer. 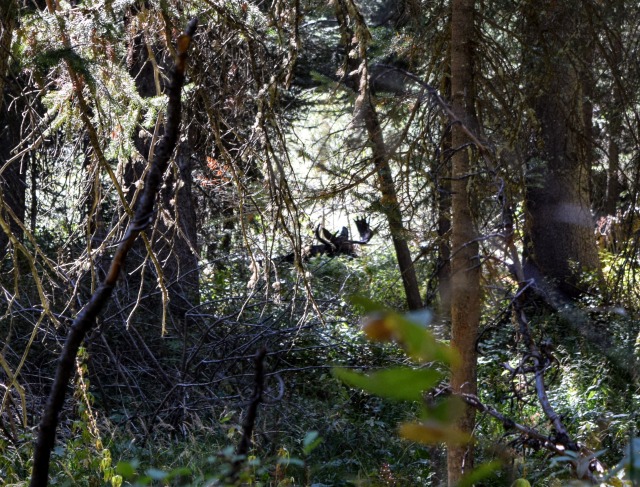 The last few miles were the toughest for us—we were so sore and exhausted, but after reaching Jenny Lake, we had to hike all the way around it (on a very exposed and hot section of the trail, due to a recent fire) and THEN another quarter mile past the trailhead to where we had actually parked.

Finally, what felt like hours later, we made it back to the car at about 2:00 p.m. We were sweaty and exhausted, but victorious, having successfully hiked the full Paintbrush-Cascade Canyon loop!

THE BOTTOM LINE: What to know about the Paintbrush-Cascade Canyon Loop

This post is already way, WAY too long, but the story of our Tetons backpacking trip wouldn’t be complete without a few shots from the spot where we spent our last night in the park: Hermitage Point, a small peninsula jutting out into massive Jackson Lake. 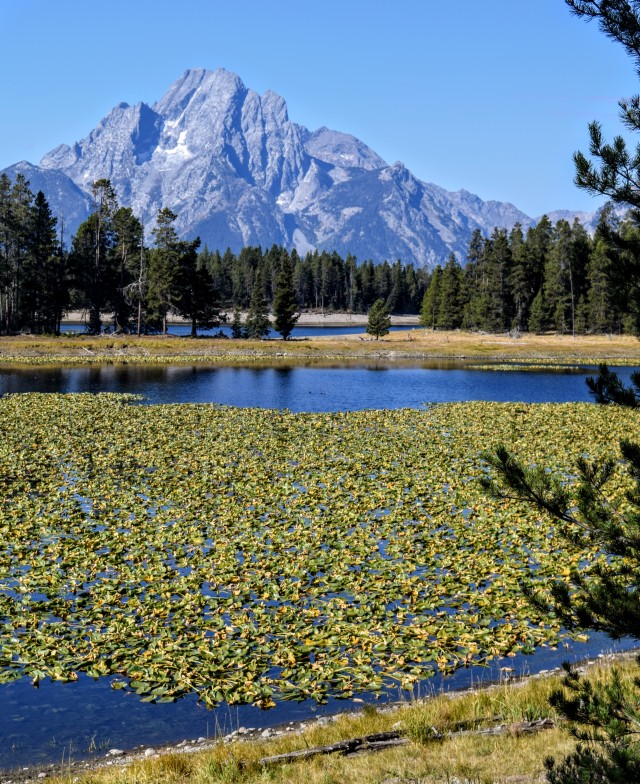 The goal was to spend our last night in the park in a more secluded spot, relaxing by the lake (where you’re also allowed to build campfires). Unfortunately, we underestimated just how exhausted we would be upon finishing the Paintbrush-Cascade loop. The five extra miles that we had to hike—while they would have been easy under most circumstances—were brutal, and I whined the entire way. But just when I told Chris that I was going to cry if we rounded one more bend without seeing our campsite, we finally made it—just in time to enjoy dinner by the fire as the sun set over the water. 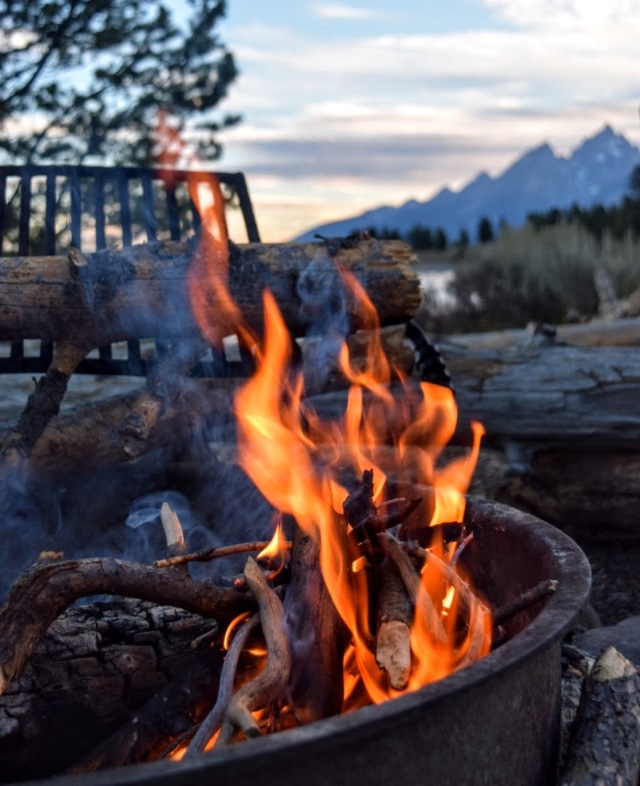 And, as always, it was worth it. 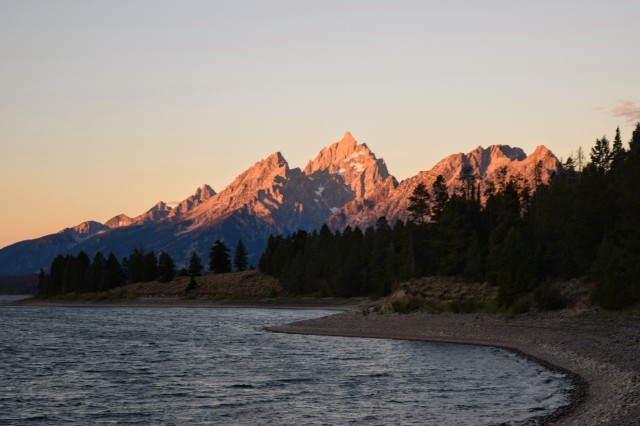