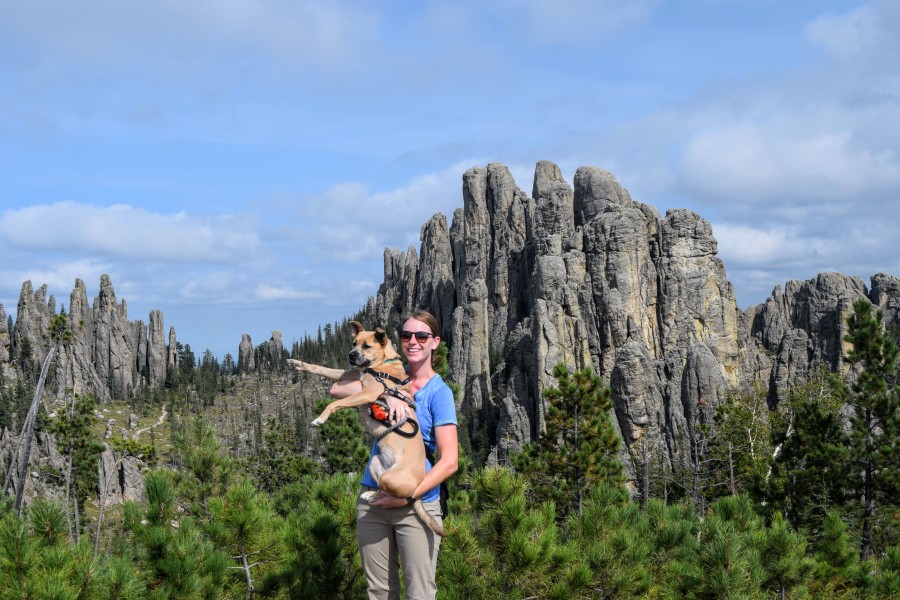 We fit a LOT into the two full days we were in South Dakota. (If you missed my first South Dakota recap of Badlands National Park, check it out here!)

On day two, after packing up camp and leaving the Badlands, we headed straight for South Dakota’s most famous landmark: Mount Rushmore. 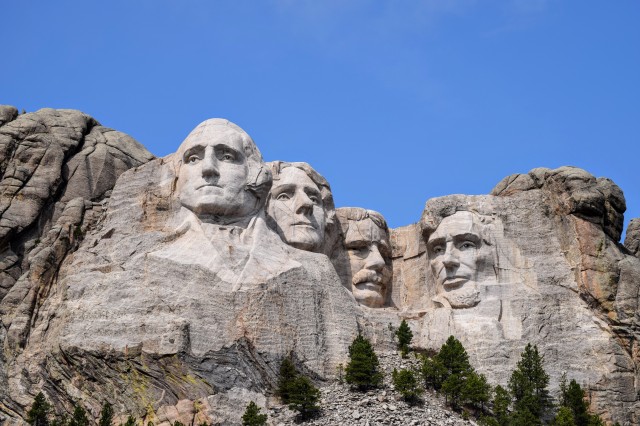 I was a little bit annoyed that, even with our national parks annual pass,  we still had to pay $11 for “parking” (the alternative: hike several miles up a steep highway?) to go see the monument. But we paid our way and went to check it out—one at a time, since dogs aren’t allowed inside the monument. 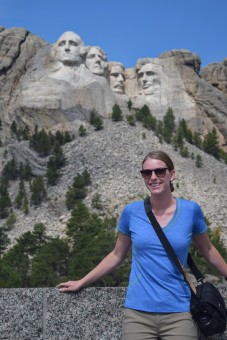 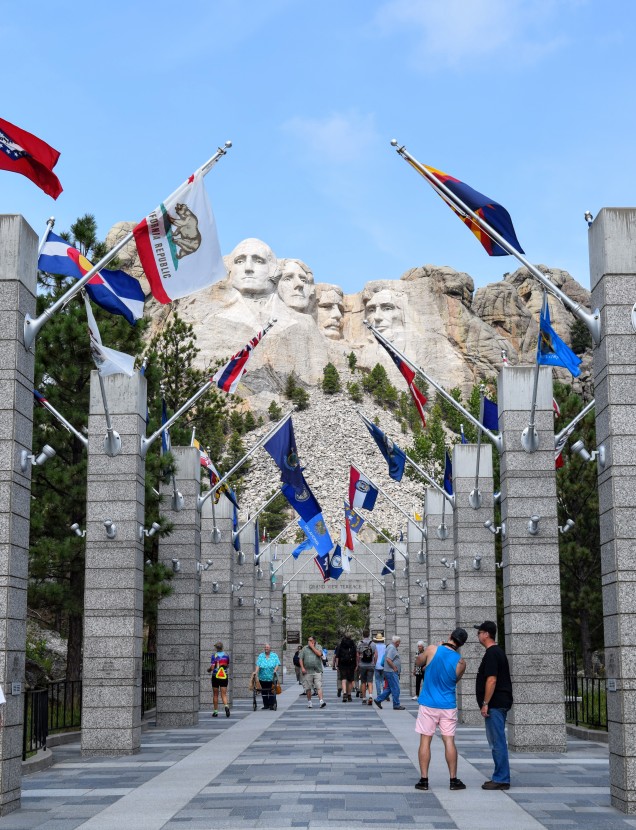 Honestly? It was fine. Pretty much what you’d expect. There’s a gift shop, some exhibits that teach you about how it was made, and the Avenue of Flags (above, representing each state) leading up to a viewing platform. If you opt not to climb the 300 stairs up to the base of the statue (no thanks) then it takes about 20-30 minutes, max. It’s worth seeing, just to say you’ve been—but I probably wouldn’t go again. Personally, I think South Dakota has a LOT more to offer than some giant faces carved into a mountain….like the Black Hills National Forest!

The Black Hills were named for the deep green color of the Ponderosa pines that populate the mountains—and in the right light, make them look almost black. We have friends who know South Dakota pretty well, so we planned the rest of our afternoon around their recommendations. And I think they nailed it! (Thanks, Rica & Derek!!)

Our first stop was lunch at the Alpine Inn in Hill City, a tiny little tourist town nestled up in the hills. We split a German pilsner, ate some delicious sandwiches, then spent some time peeking into the rock shops and museums. Little Hill City, SD, is in an area where some of the best dinosaur fossils in existence were discovered—including Stan and Sue, two of the most complete T-Rex fossils ever found. (Sue now lives at the Field Museum of Natural History in Chicago, but you can see Stan at the Museum at the Black Hills Institute in Hill City.) 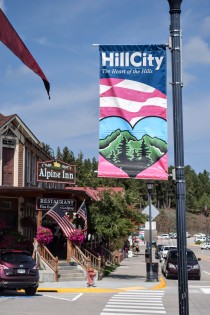 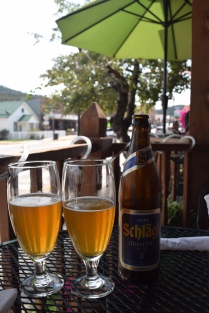 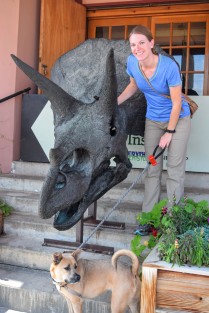 But we couldn’t spend too long, because we definitely wanted to do an afternoon hike in the Black Hills! With our friend’s recommendation, we chose a roughly 4 mile out-and-back hike to Little Devils Tower, one of several popular hikes within Custer State Park. The worst part was paying a $20 day use fee (which seemed outrageously expensive for a state park to me, or maybe the theme of this post is just that I’m a cheapskate). But I’ll admit, the hike was totally worth it.

Harney Peak is the most popular hike in Custer, so Little Devils Tower (right in the same area) is a great alternative—especially if you’re there during busy season and want a beautiful hike without the huge crowds. Granted, this was in the middle of the week, but we still only saw about five other people on the trail, and all within the first 30 minutes or so. After that, it felt like we had the park to ourselves. 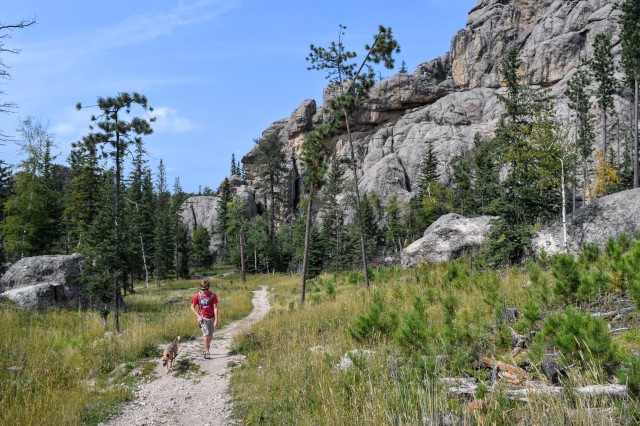 The hike started off mildly, winding through some giant boulders. The Black Hills are also known for their huge deposits of all kinds of rocks and gemstones. Throughout the hike, the ground glittered with big flakes of mica, and hunks of rose quartz (and probably a bunch of other stones that I can’t name) lined the trail, too.

We even found this little cave right off the trail, where there was SO much mica embedded in the walls, you could flake off a big chunk just by brushing your hand over the wall. It was pretty cool. 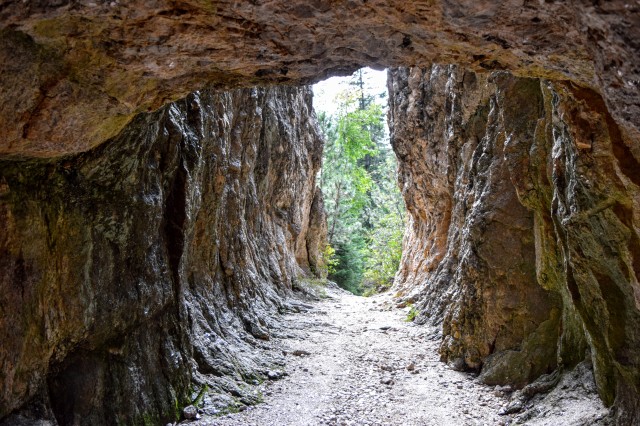 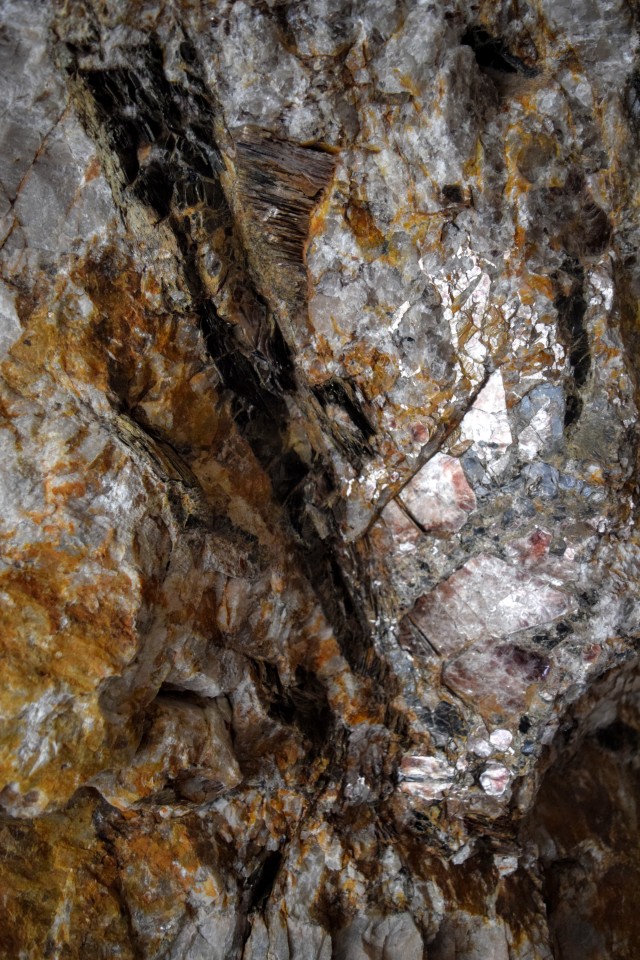 From there, the trail rose at a mild but steady pace through pines and birch trees (and more boulders). That is, until the last quarter mile of the hike, where it transformed into a straight-up scramble up a rock face.

I was a little worried about Callie at first, but our dog is apparently part mountain goat, and she climbed up all the rocks quicker than we did.

And once we made it up to the top, was it ever worth it! The view was incredible, and we could see Harney Peak over to our left. I can’t imagine the view is much better from over there (except that you probably get to see a little more of the prairie beneath the mountain range), so from my limited experience I’d definitely advise taking one of the less-popular trails.

When we got back, we took a short drive over to our campsite for the night, a free spot at the Wrinkled Rock Climber’s Trailhead in the Black Hills National Forest. It was an easy, drive-up spot where a lot of climbers pitch their tents to get a few hours sleep before getting an early start on a day of climbing. (You can imagine, with all these towering rock faces, that this area is a popular destination for climbers.)

There, we got a good night’s sleep before getting up bright and early to hit the road for our next destination—Grand Teton National Park!!

Overall, I was pleasantly surprised by South Dakota—to put it mildly. I’ll admit that, before we planned this trip, this state wasn’t really on my radar as a top destination. But it totally changed my mind. I’m so glad we got to spend a little bit of time there, and I definitely want to plan another trip now that we’ve seen everything it has to offer!